This year’s Festival of Geology will take place at University College London on 3 November 2018.

Details of this year’s Festival Talks are now available.

The 2018 Festival Photocompetition has now been launched – find out more here. 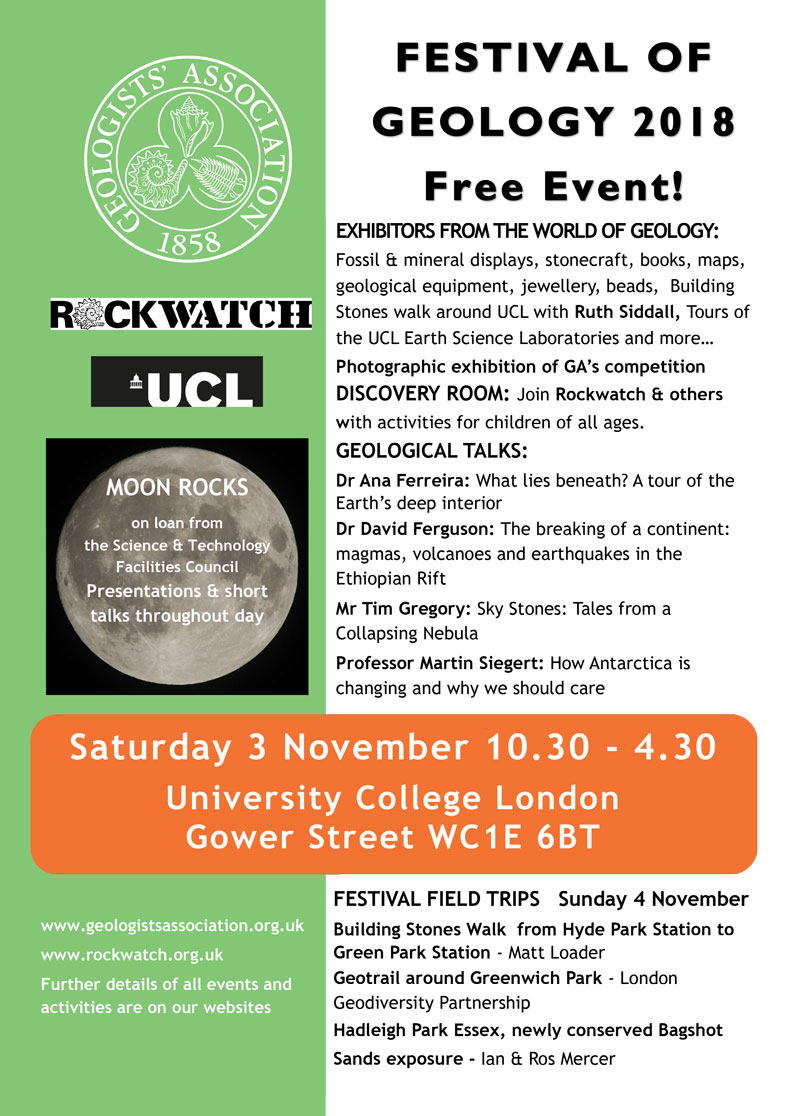 Non-GA Members and Beginners welcome but booking is essential. There is a charge of £5 per person per trip

Last year Matt led us on a very informative walk around Sloane Square. This year he has chosen to take us from the underground station at Hyde Park Corner to Green Park Station. The area is noted for its war memorials, some with exotic stones which Matt will be able to tell us about.

Meet: 10.45am at the entrance to Hyde Park tube station (Piccadilly line). The walk will last around 2 hours allowing time for those who wish to go on walk 2 to get to Greenwich for 2pm. (Geotrail around Greenwich Park via Jubilee/DLR).

2. Geotrail around Greenwich Park led by members of the London Geodiversity Partnership.

Within Greenwich Park four different geological strata are represented with two others underlying the area closer to the Thames. The geology will be discussed as well as aspects of how this area has been restless in the past although all seems quiet now. The influence of the geology on some of the features seen such as the steep slope, springs and fine views will be explained. The walk starts from the Thames Path near the Cutty Sark and goes through the Old Royal Naval College and past Queen’s House to enter Greenwich Park at Jubilee Gate. The trip is about 5 km long, mostly on metalled paths but there are some steep slopes.

Meet: 2.00 pm at the foot tunnel on the south side of the river in sight of the Cutty Sark. The nearest station is Cutty Sark for Maritime Greenwich, 20 mins from Central London by DLR. The Cutty Sark is a short walk from Greenwich and Maze Hill railway stations. Finish 4-4.30 pm. There are tea-shops close to the finish.

A trip to interpret the Tertiary geology of south Essex as seen in the landscape of Hadleigh Country Park, demonstrating large scale rotational landslips in the London Clay and overlying Tertiary sandstones. It includes a visit to the new section in the Bagshot Sands, prepared by the Essex Rock & Mineral Society and GeoEssex. Access will be on foot around Hadleigh Country Park – a walking distance of around 2 miles over undulating, sometimes quite steep, ground, with an optional extension to Hadleigh Castle either on foot or by car. Ros & Ian are becoming very familiar with the soft rock geology of Essex, once described as “gardening” but they know better!

Meet: 11 am at The Hub, Hadleigh Country Park. Transfer to and from nearby Benfleet Station on the Southend C2C line will be arranged. Finish for main itinerary at 1.30pm with optional extension to Hadleigh Castle to finish at 3pm. Lunch and hot drinks available both at The Hub and at Hadleigh Castle Tearooms. 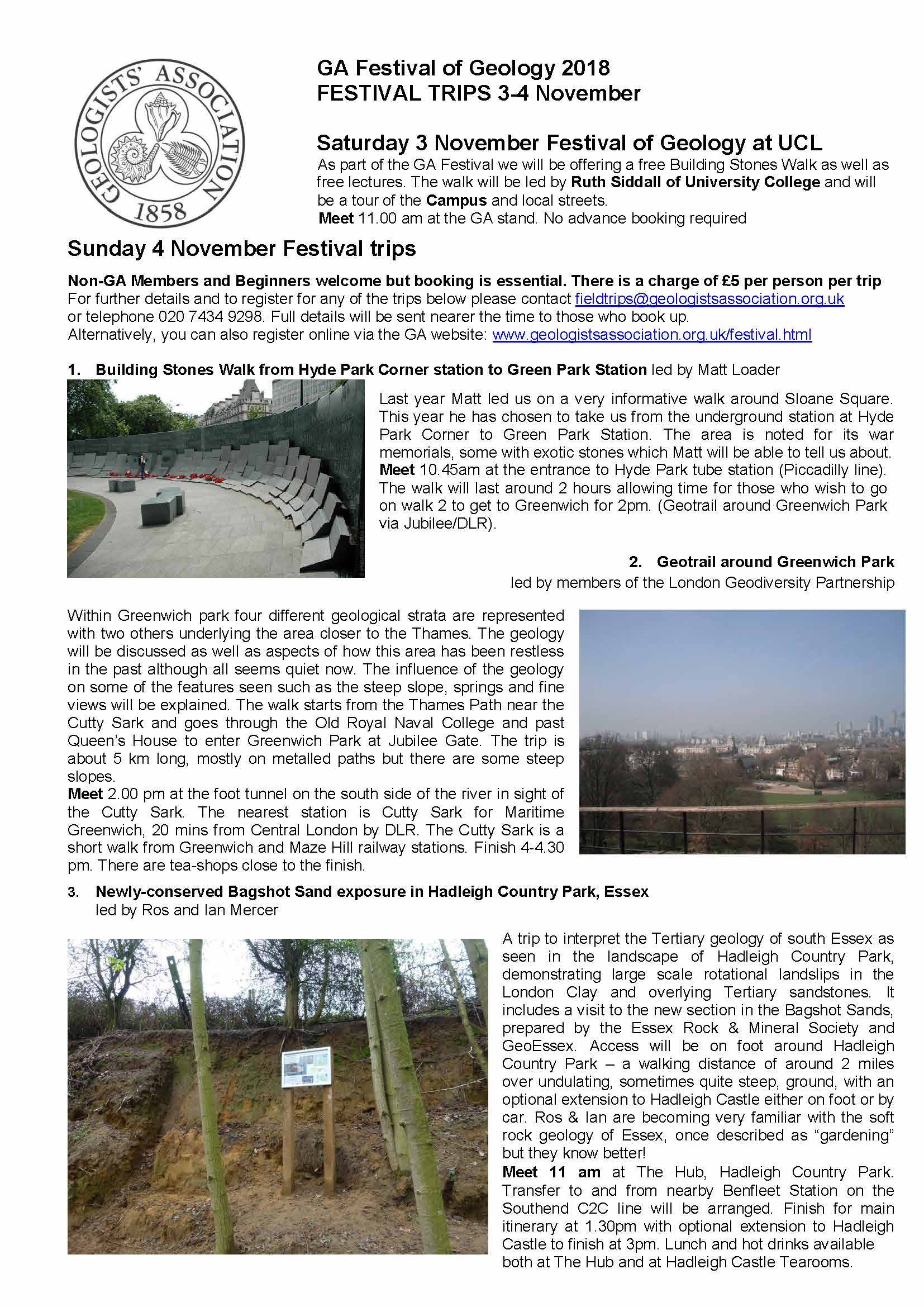 For more than 2000 years we have been fascinated by the discovery and exploration of Antarctica. The idea of Terra Australis Incognita (the Unknown Southern Land) began with the ancient Greeks, who argued a southern landmass was required to balance the northern world. This quest for knowledge led to the second voyage of Captain Cook in the late eighteenth Century, heroic expeditions by Robert Scott, Ernest Shackleton and Douglas Mawson, and the post-WW2 scientific collaboration of the International Geophysical Year in 1957-8.

While much is now known about Antarctica, it still remains unquestionably the most unexplored region on Earth. In this talk I will discuss how our appreciation of Antarctica has changed as a consequence of the technological advances required for its scientific exploration. I will describe how we measure Antarctica, and how the techniques pioneered to do this have led to an understanding of ice-sheet flow and evolution. I will show how the perception of Antarctica as a static, lifeless continent has transformed to that of a dynamic region that has the power to alter our global environment. Finally, I will question what changes in the Antarctic could mean for us in the UK, and why it should concern us all.

The Earth’s mantle is a hot shell of solid rock between the crust and the molten outer core. It makes about two-thirds of the planet’s mass, having a thickness of about 3,000 km. The mantle circulates over millions of years at very slow rates of a few cm per year: while hot, less dense material rises, cooler, denser mantle rocks sink toward the core. Mantle circulation partly controls plate tectonics, earthquakes, volcanism, mountain building, climate and possibly the habitability of our planet.

Since it is not possible to directly access the Earth’s mantle, our understanding of its structure and behavior relies on geophysics. A multidisciplinary approach is needed combining seismic observations, laboratory experiments, and computer simulations of mantle materials and circulation. Recent advances in big global seismic data, high-performance computing and in novel laboratory facilities are enabling an increasingly detailed understanding of deep Earth processes.

This presentation will discuss these advances and the latest progress in mapping the structure and dynamics of the interior of our planet. We will zoom into how cold rocks plunge into the Earth’s mantle in subduction zones (e.g., Japan, Tonga) and how they interact with hot material possibly rising from the core-mantle boundary. We will also discuss the broad implications of such deep mantle interactions.

The rifting apart of continental landmasses to form a new ocean basin is one of the most fundamental geological processes shaping our planet, yet geologists still don’t fully understand exactly how this rifting occurs. The Ethiopian rift system, home to numerous active volcanoes and fault zones, is Earth’s most advanced continental rift and may be tantalizing close to forming a new ocean basin. This talk will give an overview of recent research into the magmatic and tectonic processes shaping the Ethiopian rift valley and will explain how geoscientists use this region as a natural laboratory to study the tectonics of continental rifting.

Meteorites are rocks that fall from space and land on the surface of the Earth. As they fall at supersonic speeds they light up the sky in a dazzling display of light, but the real magic happens once scientists get them into the lab. Using the language of geology, scientists can read the stories contained within meteorites: they contain a record of the earliest history of our Solar System, hold clues about how and when our Solar System formed, how planets formed, where Earth’s water might have come from, and may also hold clues about the origin of life.