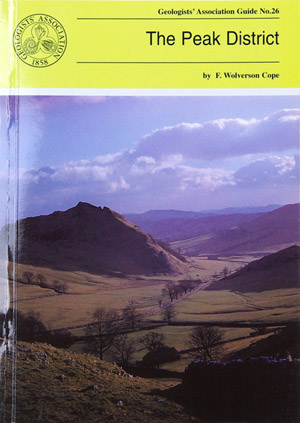 This is the third edition of this Guide and although there have been changes in classification, etc., the general exposures are as good as they used to be. Most of the itineraries in this Guide have specific locations marked on accompanying sketch maps. Where greater precision is needed grid references are given.

This is the third edition of this Guide and although there have been changes in classification, etc., the general exposures are as good as they used to be. Most of the itineraries in this Guide have specific locations marked on accompanying sketch maps. Where greater precision is needed grid references are given.
Cost: Members Price: £9.00, Non-Members Price: £12.00

Itinerary 1 The Valley of the River Wye from Buxton to Miller’s Dale
This itinerary examines the succession of Dinantian limestones of massif facies and contemporaneous igneous rocks. It visits a number of fossil localities and examines some important sedimentological and structural features.
Start Point Buxton, car park near railway viaduct in Spring Gardens SK 059 735

Itinerary 2 Miller’s Dale to Monsal Head
This itinerary continues the examination of the succession of Asbian and Brigantian limestones and contemporaneous lavas and tuffs noting, in one place, the actual dying out of a lava flow. It visits several fossil localities and examines a typical Brigantian coral band.
Start Point Miller’s Dale, car park at former Miller’s Dale Station SK 138 733

Itinerary 3 Monsal Dale and Ashford-in-the-Water
The aim of this itinerary is to view the remarkable change in the direction of the River Wye adjacent to Monsal Head, to study a well developed coral band at Hob’s House, two thin lava flows with a doleritic intrusion, and to examine the occurrence of the Ashford Black Marble.
Start point Monsal Dale, car park at Monsal Head Hotel, Little Longstone SK 185 715

Itinerary 4 Castleton and Mam Tor
This itinerary aims to study the relationship between the Dinantian limestones and the succeeding Namurian sediments and to examine the different facies of the Dinantian Stage with particular reference to their included fossils.
Start Point parking at Mam Tor on the abandoned A625, now a cul-de-sac SK 132 835

Itinerary 6 Eyam and Stony Middleton
An itinerary studying the stratigraphy and palaeontology of the massif limestones and reef limestones in the higher Dinantian so well displayed in the cliffs and quarries of Middleton Dale and around Eyam,
Start Point car park (pay) at Eyam Museum SK 216 767

Itinerary 7 Matlock, Via Gellia and Griffe Grange
The aim is to observe some of the main points of geological interest along the valley of the River Derwent from its confluence with the River Wye near Rowsley, through Matlock Bath to Cromford, then along the Via Gellia and the Griffe Gorge valley to Grangemill.
Start Point Cawdor Quarry SK 287 605

Itinerary 8 Dovedale
This itinerary examines the relationships of the various facies of Dinantian limestones to one another, to study some of the very fossiliferous reef limestones in the valley of the River Dove, and to enjoy some of the most breathtaking scenery in Britain.
Start Point Dovedale car park SK 147 509

Itinerary 9 The Valley of the River Manifold
The aim of this itinerary is to see some of the swallow holes in the bed of the River Manifold which carry the whole of the river into its underground course after a dry spell of weather. Also to examine the acutely folded limestones at Apes Tor near Hulme End, the impressive Thor’s Cave, the spectacular reef limestone features and some of the spoil-heaps of the old Ecton Copper Mine.
Start Point Hartington Village SK 129 604

Itinerary 10 Mam Tor, Edale and Kinder Scout
To study the stratigraphy and palaeontology of the Namurian rocks in the Mam Tor – Edale area and to note the relationship between these rocks and the underlying Dinantian limestones.
Start Point parking at Mam Tor on the abandoned A625, now a cul-de-sac SK 132 835

Itinerary 11 Ramshaw Rocks, the Roaches and Goldsitch Moss
The aim is to study the relationship between structure and scenery; to examine Namurian ‘grits’ (sandstones) and a typical cyclotherm including a goniatite-bearing band (marine band).
Start Point SK 0225 6825 (parking on the side of the road in the middle of nowhere!)

Itinerary 12 The headwaters of the River Goyt and the River Wye
To examine the relationship between the Dinantian limestones and the overlying Namurian sandstones and shales, and to study the Namurian succession to the southwest of Buxton together with a glance at the lowest Westphalian beds in the outlier of the Goyt’s Moss coalfield.
Start Point Poole's Cavern & Buxton Country Park, Buxton SK 049 726?