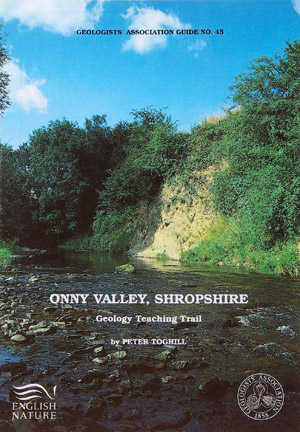 The Onny Valley, to the east of the Church Stretton Fault complex, provides a classic and famous section through the Caradoc Series and along it are exposed all the characteristic rocks varieties containing their well-known shelly faunas. This trail guide is meant to appeal to students, undergraduates, as well as amateur geologists. The general public will find something to interest them too, as the trail follows a beautiful wooded valley, with plenty of wildlife to see.

Locality 1 Quarry in Longmyndian and Hoar Edge Grit on South bank of the River Onny.

Locality 1 Quarry in Longmyndian and Hoar Edge Grit on South bank of the River Onny. Grid Ref SO 41158614

Locality 8 View point on the south bank of the River Onny showing the famous Silurian/Ordovician unconformity. Grid Ref: SO 42638525