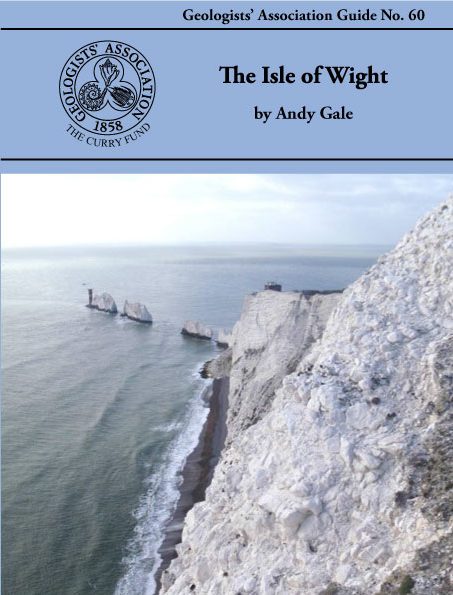 The Isle of Wight has fascinated geologists since the early years of the 19th century and has played an important role in the development of British stratigraphy and palaeontology. The Victorian interest in the Island as a holiday venue led many to discover the magnificent exposures and to collect its abundant fossils. Guides, such as that published by Gideon Mantell (1847, and later editions) Norman (1887) and numerous others, provided details of outcrops; the allure of dinosaurs and ammonites was present from these early days. The Isle of Wight was viewed as being of such importance to British geology that it was given the name of the “diamond in the Crown of British geology” (Hopson, 2011).

The coastal cliffs which surround much of the Island provide superb exposures of Cretaceous and Paleogene sediments which, although present on the mainland of southern England, are usually poorly exposed there. Additionally, the high dips of the monocline mean that strata are very easily accessible.

The Isle of Wight has fascinated geologists since the early years of the 19th century and has played an important role in the development of British stratigraphy and palaeontology. The Victorian interest in the Island as a holiday venue led many to discover the magnificent exposures and to collect its abundant fossils. Guides, such as that published by Gideon Mantell (1847, and later editions) Norman (1887) and numerous others, provided details of outcrops; the allure of dinosaurs and ammonites was present from these early days. The Isle of Wight was viewed as being of such importance to British geology that it was given the name of the “diamond in the Crown of British geology” (Hopson, 2011).
The coastal cliffs which surround much of the Island provide superb exposures of Cretaceous and Paleogene sediments which, although present on the mainland of southern England, are usually poorly exposed there. Additionally, the high dips of the monocline mean that strata are very easily accessible.

Itinerary 1 Yaverland to Culver
The succession exposed in the cliffs east of Sandown extends from the Lower Cretaceous (Barremian, Wessex Formation) through to the Upper Eocene (Bouldnor Formation), and is one of the most instructive geological sections in southern England.
Start point the sea front at Yaverland SZ 613 853

Itinerary 2 Whitecliff Bay and Bembridge Ledges
Whitecliffe Bay exposes one of the most important successions of Eocene sediments known in north-west Europe. An advantage of the bay is that the strata up to the Bembridge Limestone are vertical to steeply dipping, which permits easy access to the thick succession.
Start point car park at Whitecliff holiday complex (SZ 640 864) and take westernmost of the two paths down to the shore, adjacent to the Wonky Cafe.

Itinerary 3 Edward Forbes’ lost section: St Helens to Seaview
Edward Forbes was a pioneering botanist, zoologist and palaeontologist who first described the stratigraphy and palaeontology of the upper part of the Tertiary succession in the northern Isle of Wight. His work was published posthumously as “The Tertiary Fluvio-Marine Formation of the Isle of Wight” in the mid 19th century, where one of his important observations between St Helens and Seaview, where he named the St Helens Sand and the overlying Nettlestone Grit successions, was overlooked and interpreted as landslipped material. More recent investigation (Gale et al. 2006) proved the veracity of Forbes’ observations and his original names resurrected by King (2016).
Start point car park at the old ruined church on The Duver SZ 637 892

Itinerary 4 Binstaed and the ruins of Quarr Abbey
This excursion provides a background to the geology of Binstead Stone, a visit to the long-abandoned quarries and a look at the mediaeval ruins of Quarr Abbey, built from the stone.
Start point park next to the Holy Cross church in Binstead SZ 575 928

Itinerary 5 Porchfield to Newtown Harbour
Erosion in the Eocene, stromatolites and the Insect Limestone, which is the source of highly diverse insect, spider and plant fossils, beautifully preserved as moulds in lenses of a fine grey limestone, lying several meters above the Bembridge Limestone.

A low or falling tide is needed and the last part of the walk down to the shore is often very wet, so rubber boots are recommended.
Start point Southern end of Shanklin Esplanade (cars and minibuses only) SZ 585 811

Itinerary 6 Bouldnor to Hamstead
The cliff and foreshore sections between Bouldnor and Hamstead cut through the axis of the Bouldnor Syncline, and expose the youngest Palaeogene strata present on the Island, or anywhere in England. The section is best known for finding bones of reptiles (turtle and crocodiles) and mammals which have washed out of land slipped material from the Hampstead Member. More recent research has identified evidence for the local representation of a major event in Earth history - the development of major ice caps on Antarctica and accompanying global cooling c. 33.7 Ma.
Start point Car Park at Boulder Viewpoint (SZ 367 899) and take coastal path northwards, until it reaches the shore.

Itinerary 7 Sconce to Colwell
Famous for its mollusc shells, from one of the least common groups of gastropods, the air-breathing species of land snail. One section of the Bembridge Limestone at Sconce near Yarmouth yielded these in relative frequency and local collectors broke up large blocks on the shore, seeking well-preserved specimens. The most desirable were Bulimus (now Rillyarex) ellipticus, Achatina (now Palaeoglandina) costellata, Helix globosa (now Archygromia spp.) and Palundina (now Viviparus) angulosus. These are not common today but still do occur here.
The cliffs and foreshore of the Colwell Bay also yield beautifully preserved bivalves and gastropods from the Colwell Bay Member; mostly brackish marine species.
Start point park at Fort Victoria (SZ 338 898), which is now a country park, and walk southwards along the beach towards Fort Albert.

Itinerary 8 Alum Bay and Headon Hill
The section in Alum Bay and on Headon Hill is a classical one in English geology. The cliffs and foreshore are privately owned by the company who owns the amusement complex on top of the cliff and they do not grant permission to sample. Indeed the cliffs are roped off for much of the year, and if you approach the cliffs closely in summer, security guards will warn you off. However, no-one is there during the winter.
Start point park in the large car park (SZ 306 854) adjacent to the amusement park, paying the parking fee, and take the stairs down to Alum Bay, or perhaps the chairlift.

Itinerary 9 Freshwater Bay
The west side of Freshwater Bay exposes levels of lower Seaford Chalk equivalent to that described in Sussex by Mortimore (1986) who identified three groups of thin marly wisps in 12 m of chalk overlying the East Cliff Marl, called Belle Tout Marls 1 - 3. A massive flint at 28.2 m is evidently the correlative of the East Cliff Flint of Kent and Sussex.
Start point Albion Hotel (SZ 346 857) and walk along the cliff on the west side of Freshwater Bay.

Itinerary 10 Compton Bay
Compton Bay provides excellent exposures through the upper part of the Wealdon Group, the Lower Greensand Group, the Selbourne Group and the lower part of the Chalk Group.
Start point park in the National Trust car park (SZ 371 851) next to Compton Farm, cross the road and take the footpath to Compton Bay.

Itineraries 11, 12 & 13: The habitat of the Wealdon dinosaurs
Andy Gale, Steve Sweetman and Meg Jacobs
The south west coast of the Isle of Wight has extensive exposures of the Wealdon Group Wessex Formation, which has yielded spectacular vertebrate fossils since the early 19th century, particularly those of dinosaurs. New discoveries are being made continually. The coastal sections are split into three separate itineraries and provide abundant evidence of the habitats in which the dinosaurs lived, from sedimentary evidence, including footprints.

Itinerary 11 Shepherd’s Chine to Barnes High
Start point park by the road at the top of Shepherd’s Chine (SZ 450 799) and take the path down to the beach and turn right, walking to the north-west.

Itinerary 12 Chilton Chine to Brook Chine
Start point park at the top of Chilton Chine (SZ 410 823) and walk down to the shore, then turn left to the south-east toward Grange Chine.

Itinerary 14 Atherfield to Chale: a record of Aptian time
The Atherfield to Chale section provides one of the most important and expanded records of the Lower Cretaceous Aptian Stage in northern Europe. As elsewhere it is either very incomplete or poorly exposed.
This is a seriously demanding section, and attention must be paid to both the state of the tide and sea conditions. N.B. At present the steps at Whale Chine are closed, so it is necessary to either return to Sherherd’s Chine, or continue all the way along to the landslip at Rocken End (a distance of approx. 6 km).
Start point either descend Shepherd’s Chine (SZ 450 799), and turn left towards Atherfield, or take the cliff top path to the Atherfield Coastguard Cottages (SZ 453 794) and descend the steps cut in the Atherfield Clay by fishermen.

Itinerary 15 St Catherine’s Point Landslip complex
Eddie Broomhead and Andy Gale
The coastal landslide system between Ventnor and Blackgang is bounded for much of its extent on its landward side by an inland cliff, giving rise to its name ‘the Undercliff’. The town of Ventnor and numerous smaller settlements have grown up on the Undercliff, attracted by its marine aspect and favourable microclimate. These settlements are commonly affected directly by movements of the underlying landslides, or indirectly through movements on highways or other infrastructures.
St Catherine’s Point is the southernmost point on the island, close to the western end of the Undercliff. The Undercliff landslides have been investigated at a number of sections, but nowhere better than at St Catherine’s Point, where one complete section and a part section at the lighthouse were investigated by means of boreholes.
Start point park at Gore Cliff car park (SZ 491 767), which is situated in an old quarry cut in the Upper Greensand, and walk along the path which leads around the edge of Gore Cliff.

Itinerary 16, 17 & 18 Ammonites and a building stone: the geological legacy of Ventnor
Itinerary 16 Ventnor landslip
Provided abundant fossils from slipped blocks of Upper Greensand and Grey Chalk Subgroup, particularly ammonites. Although active quarrying has long ceased, and collecting opportunities are more limited, the excursion provides a flavour of the geology of this region.
Start point limited parking in Niton, along the side of the road leading to St Catherine’s lighthouse (SZ 498 753). Alternatively, have lunch in the Buddle Inn (a fine Purbeck stone floor) and ask permission to leave your car there for a few hours (SZ 503 757)

Itinerary 17 Ventnor Stone section
Overhanging cliff of air-weathered Upper Greensand on the left side, providing a spectacular section through the Ventnor Stone and overlying chert beds.
Start point park to convenient place along the side of the road and look for the footpath sign on the north side of the road that says ‘Cripple Path’ SZ 512 761

Itinerary 19 Shanklin to Ventnor
The cliffs between Shanklin and Ventnor provide excellent exposures of the higher part of the Lower Greensand Group and the basal Gault Clay (at the base of the Selbourne Group), which are far more easily accessible than those in the Chale Bay and more fossiliferous than those in Sandown or Compton Bays. The Shanklin end of the section, including Horse Ledge and Yellow Ledge, is a very easy walk from the Shanklin seafront.
You will need a low or falling tide.
Start point either from the Shanklin end, park on the Shanklin sea front (SZ 586 814) and walk south; or from the Ventnor end, along the road near East Dene House (SZ 577 781) at Bonchurch and walk north.