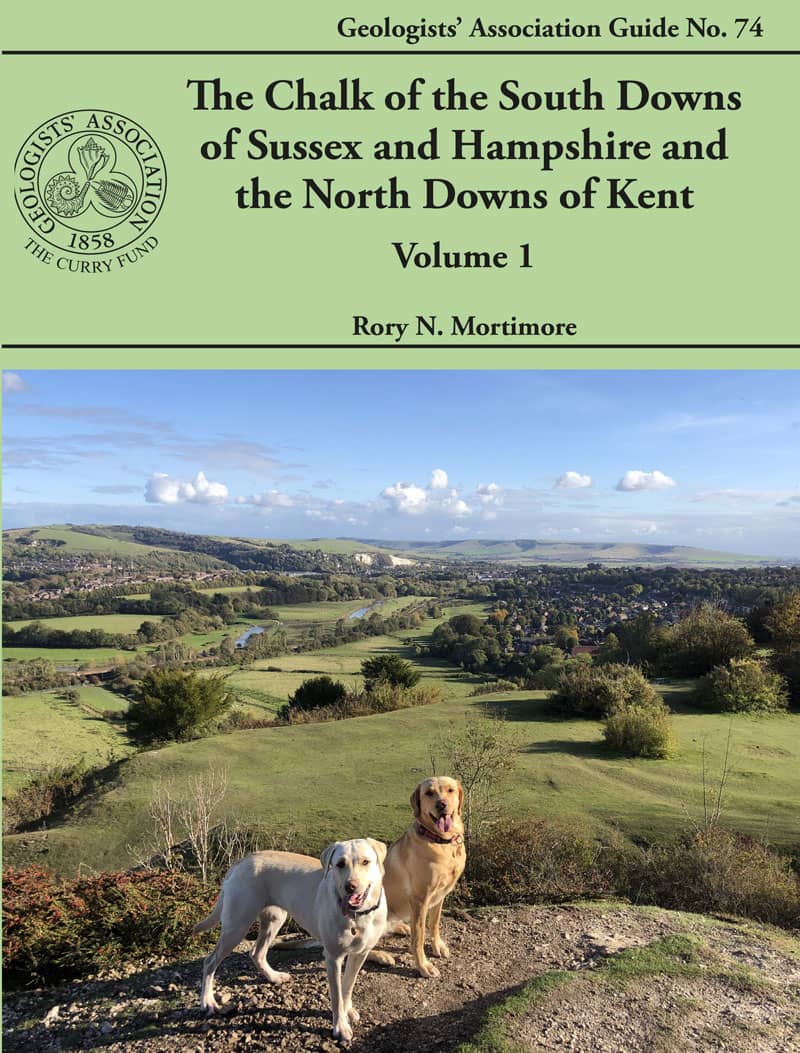 Member's Price: £21 for both volumes

74. The Chalk of the South Downs of Sussex and Hampshire and the North Downs of Kent (2021) New Revised Edition

This guide is now published in two volumes. Volume 1 contains the Introductory scene-setting geology and excursion guides to the East Sussex field sections and the coastal cliffs from Eastbourne to Brighton. Volume 2 takes the geology westwards through the West Sussex South Downs to Hampshire and the western end of the South Downs Way at Winchester and includes all the Kent North Downs itineraries, the Index and references.

The content of the guide has been greatly influenced by requests from GA members including more walks along the main inland river valleys, updates on the geology of the coastal cliffs and inclusion of more measured field sections with illustrations of key fossils. Many also asked for an expanded introductory section explaining the regional and international geological context and an explanation of the applied geology and relevance to engineering geology and hydrogeology. As well as Chalk geology there are very fine exposures of Quaternary geology particularly in the cross-sections of dry valleys between Newhaven and Brighton and the raised beach at Brighton.

Volume 1
Itinerary 1 Lewes: the Mount Caburn Chalk Pits
Exposures of the Chalk around Lewes in East Sussex provide a unique insight into sedimentary and tectonic processes in the formation of chalk deposits. It was also around Lewes and the immediate coastline where ideas leading to a new refined stratigraphy were developed.

There are several wonderful routes or walks to the Mount Caburn-Lewes Chalk pits, all within walking distance of Lewes Railway Station. A day is needed for each to do justice to the geology.
Start Point Lewes Railway Station (TQ 417 098) or cars can be parked at the Cliffe Industrial Estate (TQ 426 093).

This itinerary is divided into two parts and each can be treated as single stops, short morning or afternoon walks or all day excursions. If travelling by car, parking can be expensive in Lewes although parking along suburban roads is possible especially Neville Estate (TQ 400 108).

Itinerary 5 to 7: Cenomanian to Campanian Chalk
Beachy Head and the Seven Sisters are the most famous Sussex coast sections. Of equal geological interest are Seaford Head between Seaford and the Cuckmere, and the New Haven to Brighton cliffs sections. Each of these three localities provides at least a day-long itinerary. All the strata from the late Albian Gault and Upper Greensand, the Cenomanian to the Early Campanian Chalk and remnants of Palaeogene sediments are exposed in an east-to-west traverse from Eastbourne to Brighton. At Black Rock, Brighton, the Quaternary raised beach, ancient cliff line and periglacial slope deposits record climate change and sea-level fluctuation during the Quaternary.

Volume 2
Itinerary 8 The River Adur Valley area
Eight locations covered by four routes:
Route 1a) Golding Barn Quarry and Beeding Small Quarry
Golden Barn Quarry is a working quarry and permission is needed to study the Chalk here where the Plenus Marls and Melbourn Chalk Rock are present.
Beading small pit is one of the last clear exposures in the base of the Lewes Nodular Chalk formation (Upper Turonian) in the South Downs, which can still be studied relatively easily in one section.
Start Point vehicles can be parked on the wide grass verge of the A2037 Henfield Road opposite Golding Barn (TQ 208 108), or probably more safely, park at the Beeding Hill National Trust car (TQ208 097).

Route 1b) Shoreham Cement Works Upper Beeding Quarry
Upper Beeding Shoreham Cement Works quarry is the last of the great Chalk Pits of southern England that exposes, in detail, the Chalk formations forming the core of the Downs, showing stratigraphy, sedimentology, palaeontology and geological structure of the Chalk and is weathering, including karst features. It has a special place in UK Cretaceous geology as it is here, for the first time in the Chalks stratigraphy of England, that several internationally important Late Turonian and Coniacian fossils have been accurately located.
Permission is required to enter these old quarries from the owners and developers.
Start Point Shoreham Cement Works (TQ 202 088) or alternatively park in Upper Beeding (TQ 194 106) and walk to the entrance of the quarry.

Route 2 Adur Valley west side along the Steyning to Sompting Road
The Beeding Small Pit and Shoreham Cement Works quarries are the major geological exposures in the Ardur Valley. A traverse along the west side of the Ardur valley on the Steyning to Stompting Road has two exposures on Steyning Roundhill and several stopping points to view and interpret the landscape in relation to the Chalk formations en route to Sompting Church.
Start Point park along roadside at the abandoned Steyning Roundhill Pit 2 (TQ 168 103) or from the South Downs Way or other footpaths shown on an OS map for the area.

Route 3 Findon Valley
Findon valley is unusually large for a dry valley that crosses the South Downs from north (Washington) to south (Worthing). The first part of the route illustrates the continuity of the geology forming the main escarpment near Washington. The second part illustrates the geology of the Secondary Escarpment and the Neolithic Flint Mines at Cissbury, Findon.
Start Point car park (TQ 120 120) which can only be accessed from the southbound carriageway of the A24. There is a bus service from Worthing (Broadwater) to Washington every hour and there is a bus stop adjacent to where the South Downs Way crosses the A24.

Itinerary 10 Chichester area
West of the Arun valley major exposures of Chalk become increasingly rare in the South Downs, and are mainly confined to recent road cuttings such as the A3 through Buster Hill and the M3 around Winchester.
Pre-planning is required as the quarries require permission to visit.
Start Point parking is possible along the grass verge alongside the track leading to the South Downs Way and the entrance to the Chalk Pit (SU 953 158). Popular with dog walkers, it may be better to use Fryan’s Hanger viewpoint car park (SU 955 161).

Itinerary 11 Buster Hill area West Sussex-Hampshire border
Buster Hill Limeworks , now Buster hill Chalk Quarry, is one of the few accessible exposures on this itinerary and is an active quarry with work in progress with respect to recording the geology. The owners are very accommodating and keen to know more about the geology of their quarry, a great opportunity for local groups to contribute to the geology of the South Downs.
Start Point with prior permission cars can be parked at the entrance and/or the entrance trackway to Buster Hill Chalk Quarry (SU 728 205).

Itinerary 12 Winchester and the end/strat of the South Downs Way
Winchester, at the west end of the South Downs Way, is in the centre of a county that could quite rightly be called “The Chalk county” as there are huge tracks of country entirely on the Chalk outcrop. It is, therefore, surprising how few Chalk exposures they are across the county and how little is known about the Chalk geology of the region. This makes the geological information gained from the large road cuttings along the M3 around Winchester at Spitfire Bridge in the north and Twyford Down to Shawford in the south, crucial to understanding the geology of the county.
Start Point East Winchester Park & Ride car park (SU 488 282) and walk south on the footpath up to the access bridge over the M3 that leads onto St Catherine’s Hill. It also possible for a few cars to park near the access bridge (SU 490 277).

Chalk of the North Downs of Kent
Kentish Chalk is famous for the White Cliffs of Dover and these cliffs are the natural starting point for five itineraries studying the Chalk of the northern and eastern rim of the Weald and the North Downs of Kent in general. Despite a long history of interest in the White Cliffs Chalk is only relatively recently that detailed correlations have been made between Langdon Bay and East Cliff on the east side of Dover and Aker’s Steps at Samphire Hoe on th ewest side of Dover.

Itinerary 13 Folkstone - The Warren toAbbot’s Cliff, Lydden Spout, Samphire Hoe, Aker’s Steps and Aycliff
The Folkestone Warren-Abbot’s Cliff to Samphire Hoe coastal cliff geology can be approached either from Dover in the east or Folkestone in the west.
Start Points Samphire Hoe access tunnel (TR 299 340) from the east (only accessible from the west bound A24 carriageway; East Cliff Pavilion, Folkestone (TR 239 365) from the west, where cars can be parked easily at the Pavilion and on Wear Bay Road.

Itinerary 14 Dover East Cliff to St Margaret’s at Cliffe
Too many, the itinerary from Dover eastwards is the classic white Chalk section. It is entirely in the White Chalk Subgroup extending from the base of the Lewes Nodular Chalk to high in the Seaford Seaford formation. It is possible to walk the section from Dover Priory Station to the East Cliff and then down at the Langdon Stairs to the beach. A falling tide is essential. There is one very critical part of the itinerary with respect to tides - Ness Point on the south side of St Margaret's at Cliffe can only be rounded at low tide and is extremely dangerous on the rising tide, once the water is covering the rock platform.
Start Point National Trust White Cliffs Country Park, East Cliff viewing point (TR 334 422).

Itinerary 15 The Isle of Thanet
The Thanet Coast geological SSSI comprises 21 km of Chalk cliffs from Cliffs End in Pegwell Bay on the south coast, along the east coast through Ramsgate, Broadstairs and Kingsgate and along the north coast from Margate to Greenham Bay, Birchington. It is designated an SSSI because it is one of the finest continuous exposures of a particular stratigraphical level in the International classification of the Cretaceous era, namely the entire Santonian and the Santonian-Campanian boundary. In addition the sale of Thanet is the type locality for some of the most conspicuous marker beds in the Chalk of southern England; bedroll’s Columnar Flint Band, Whitaker’s Three Inch Flint Band, Barrios’ Sponge Bed and the Bedwell Line.
Start Point if travelling by public transport start in Ramsgate and walk from the harbour to Pegwell Bay; if travelling by car then use the Cliffs End Village car park near the Viking Ship (TR 352 643).

Itinerary 16 North Kent, Medway Valley Chalk Pits
The Medway valley, from Snodland in the south to Rochester in th enorth and around Blue Bell Hill to the east, offers the chance to compare the Cretaceous, Palaeogene and Quaternary geology in inland North Kent with the geology seen on the East Kent coastal cliffs.
Start Point Start of footpath along south side of Martin Earle’s Pit (TQ 723 678). The Pit is now a housing estate and parking is possible along the residential roads.

Itinerary 17 North Kent and the Thames Gateway Chalk Pits
Huge cement works quarries now shopping centres, on either side of the River Thames in the West Thurrock and Dartford areas at Lakeside on the north and Bluewater Park on the south side near the M25 Dartford Crossing, illustrate the widespread development of individual talk marker beds in the Lewes and Seaford Chalk Formations (Late Turonian to Early Santonian). These field exposures, combined with the many borehole in the area, also provide the evidence for lateral changes in the Chalk, which include the return of the Lewes Marl (not present in the North Downs of Kent), and markedly better development of the Belle Tout Marls in the Thames Gateway area compared to East and North Kent.
Start Point roof parking areas of the multi-storey car parks at Bluewater Shopping Centre (TQ 579 735), formerly Swanscombe West Pit.