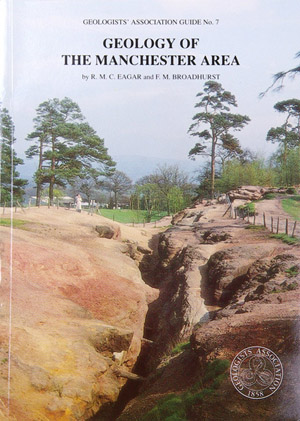 The rocks exposed in the Manchester area range in age from Dinantian (Lower Carboniferous) to Triassic and superficial coverings of Pleistocene and Recent sediments. Of the sixteen itineraries described, two are devoted to Dinantian, five to the Silurian, four to the Triassic and three to the Pleistocene and Recent. The last two itineraries are concerned with mineralisation and mining and with the building stones of Manchester.

The rocks exposed in the Manchester area range in age from Dinantian (Lower Carboniferous) to Triassic and superficial coverings of Pleistocene and Recent sediments. Of the sixteen itineraries described, two are devoted to Dinantian, five to the Silurian, four to the Triassic and three to the Pleistocene and Recent. The last two itineraries are concerned with mineralisation and mining and with the building stones of Manchester.

Itinerary I Wye Dale Area, east of Buxton (full day)
A.E. Adams
Some of the oldest exposed rocks in north Derbyshire are found in the Woo Dale inlier, east of Buxton. This itinerary includes localities in these Holkerian limestones as well as in some of the younger sediments.
The Wye Dale area, close to the A6, is easily accessible from Manchester by car or public transport. The itinerary has been extended to include a classic nearby exposure in Carboniferous basaltic igneous rocks.
Start Point Entrance to Cunning Dale SK 084 725

Itinerary II Clitheroe and Pendle Hill (full day)
I.M. Simpson
The busy market town of Clitheroe in the Ribble Valley is dominated, as it has been for centuries, by the ancient and now ruined Norman castle (SD 743 417) in the town centre. The castle, standing high on knoll of Lower Carboniferous limestone, commands a wide view of the valley and surrounding districts, thus forming a very appropriate starting point for this itinerary.
Start Point Lowergate public car park (SD 744 418) and walk southwest to castle knoll.

Itinerary III Cheesden Brook and Turf Moor (full day)
F.M. Broadhurst
This excursion is best done by use of private transport. The excursion follows a 3 km round trip across rough ground and high moor. Adequate clothing and footwear is essential and parties should be aware of the risk of being caught in mist. The Yeadonian (Namurian) rocks to be seen are well exposed and worth the effort.
Start Point south side of the A680 where it crosses Cheesden Brook (SD 823 165) where there is space to park several cars or one or two minibuses

Itinerary IV Chunal, Charlesworth and Broadbottom, near Glossop (full or 2 half-days)
P.A. Seldon
Glossop lies on the western limb of the Pennine Anticline, where the dipping and faulted succession of late Namurian and early Westphalian coarse-grained grits, sandstones and shales exerted a profound influence on the topography. In particular, the geological control on Quarternary events, the resultant drainage patterns and industry or history can be readily appreciated. A full, clear day is ideal for this walk of about 15 km, which starts at Glossop railway station and ends at Broadbottom station. Alternatively, the excursion can be conveniently divided into two half-day circular walks from the stations.
Start Point car parks at either Glossop railway station (SK 034 942) or Broadbottom station (SJ 991 938)

Itinerary VII Jumbles Country Park, Bolton (half or full day)
K. Riley
The purpose of this itinerary, which can extend to a half or full day, is to visit typical sections in the Namurian and Westphalian strata of the Silesian (Upper Carboniferous) north of Bolton. The itinerary can be undertaken on foot or by car as all exposures are adjacent to roads with parking places close by.
Start & Finish Point Bromley Cross railway station car park SD 729 131

Itineraries VIII - XI Triassic Rocks of the Cheshire Basin (half or full day)
D.B. Thompson
The object of the itineraries VIII to XI is the study and compare the stratigraphy, sedimentology and mineralisation of about 600 m of Triassic strata exposed at Alderley Edge and in the Styal and Frodsham areas.

Itinerary IX - Alderly Edge 2 (full day)
Before attempting this itinerary, which is designed to illustrate mineralisation and structure, it is worth while examining the display of ores and sediments in the special exhibit in the Manchester Museum.
Start Point car park at Alderley Edge railway station SJ 843 785

Itinerary X - Styal area, Cheshire (full day)
The strata outcrop is in a gorge and plateau near the River Bollin, 13 km south of Manchester. They dip northwest and lie on the northwest limb of the Wilmslow Anticline, whose axis is aligned ENE - WSW. Powerful normal faulting and slight mineralisation can be observed.
Start Point National Trust car park at Quarry Bank Mill, Styal SJ 836 831

Itinerary XI - Frodsham area (half or full day)
Reached by car or train from Manchester, this itinerary is suitable for a half or full day’s excursion.
Start Point car park at Frodsham railway station SJ 518 779

Itinerary XII - XIV Goyt Valley between Marple and Stockport (full day)
R.H. Johnson
The Lower Goyt Valley offers an opportunity to study some aspects of the stratigraphy of the Late Pleistocene (Devensian) Glacial Stadial and also the history of changing river channel patterns over the last 10,000 years in the Holocene (Flandrian) epoch.
Although access to the valley sites is possible from many places, as there is a footpath throughout the length of the valley, actual site access is often difficult if only one excursion is contemplated. Therefore the valley is divided into three sections with a list of localities that can easily be visited from specific access points.

Itinerary XIII - Marple Aqueduct to Chadkirk
The aqueduct is sited at the upstream end of the Ley Hey Park River gorge which is a large incised valley-meander eroded in Carboniferous sandstone and mudrocks. Public access to the gorge unfortunately is very restricted, but the aqueduct does provide a good viewpoint for examining the dramatic contrast in the valley cross-sections upstream and downstream.
Start Point car park at Brabyn’s Park (SJ 964 895), Marple Bridge

Itinerary XIV - Chadkirk to Stockport
For most of its length the River Got has been free to meander incising itself into glacial sediments but the underlying bedrock surface is now exposed in the channel at several places which this excursion visits.
Start Point Chadwick Farm Trail car park SJ 937 896

XV The mineralisation of the Ecton Hill, Staffordshire
R.S.W. Braithwaite
The itinerary explores the geology and mineralogy of the Ecton Hill area. Many of the mine shafts in the area are now blocked, but some remain open, so great care must be taken to avoid falling down them, and to avoid throwing stones or anything else down them.
Start Point Manifold Valley Visitors Centre SK 1034 593

XVI Building Stones of Manchester city centre
I.M. Simpson and F.M. Broadhurst
Since the publication in 1975 of a building stone guide to central Manchester by Simpson and Broadhurst numerous developments have taken place in the city. Most of the original guide is still useful but this excursion provides an opportunity to inspect some of the building stones which have appeared more recently.
Start Point Moseley Street adjacent to St. Peter’s Square SJ 840 980