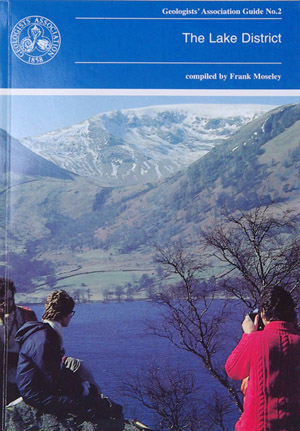 It is virtually impossible for one person to cover to any reliable depth every part of the Lake District geology even though the whole region is no more than 50 km in diameter. Therefore each of the 25 itineraries within this guide is produced by an expert on the ground. The guide is designed to be used with suitable topographical maps.

It is virtually impossible for one person to cover to any reliable depth every part of the Lake District geology even though the whole region is no more than 50 km in diameter. Therefore each of the 25 itineraries within this guide is produced by an expert on the ground. The guide is designed to be used with suitable topographical maps.

Itinerary 2 Mungrisdale and the Caldew Valley
The main purpose of this excursion to 21 localities is to examine the Skiddaw Slates, some of which are within the aureole of the Skiddaw Granite.
Start Point School-House Quarry NY 364 306

Itinerary 3 The Carrock Fell Igneous Complex
Visits to 15 localities take in the Mosedale series and the Carrock series.
Start Point above Mosedale NY 357 323

Itinerary 4 The Skiddaw Group of Hope Beck, Hopegill Head and Gasgale Gill
This excursion via 21 localities examines the stratigraphy and sedimentology of the Skiddaw Group north of the Causey Pike Thrust. It also looks at hornfelsed Skiddaw Group at the North edge of the Crummock Water Aureole. The sequence is Arenig in age and of a turbidity current origin.
Start Point Hope Beck NY 1692 2418 or Lanthwaite Green car park NY 1588 2076

Itinerary 6 The Skiddaw Group of Stoneycroft Gill, Causey Pike and Outerside
This itinerary can be divided into a half-day (8 localities, 2km walking, 150m ascent) or a full-day (17 localities, 6km walking, 500m ascent). To be seen are the olistostromic Buttermere Formation (and Robinson Member), the normal siltstone facies (Kirkstile Slates) and its alteration by hornfelsing, the thrusting of the hornfelsed strata over unaltered rock, and turbidite sequences both right-way-up and inverted.
Start Point Barrow Mine NY 2332 2173

Itinerary 7 Devoke Water and Yoadcastle
This half-to-whole day excursion examines the Eskdale Granite and its contact relationships with the Skiddaw and Borrowdale Volcanic Groups. The trip is 7km over tough fellside, climbing 240m. 6 localities visited.
Start Point crossroads at SD 1708 9770

Itinerary 9 Cockley Beck – Grey Friar
This whole-day excursion visits 11 localities, is 5km over rough fellside and a climb of 600m. Examined are the lower part of the Borrowdale Volcanic Group succession on the southern limb of the Wrynose Anticline.
Start Point Cockley Beck Bridge NY 2466 0166

Itinerary 10 Hard Knott, Eskdale
This excursion demonstrates various aspects of the volcanic geology of the Birker Fell Formation and also a sequence of later, acid pyroclastic deposits which have a steep, unconformable relationship with the earlier lava pile. 8 localities are visited via 6km over open fell, ascending 450m.
Start Point car park at NY 2133 0108

Itinerary 12 Buckbarrow and Middle Fell, Wasdale
This full day’s trip to Wasdale provides the opportunity to study the lower part of the Borrowdale Volcanic Group together with the southern part of the Ennerdale Granophyre. The 6km route and 600m ascent over rough terrain requires strenuous walking to 13 localities.
Start Point Greendale NY 1435 0563

Itinerary 13 Holehouse Gill
The purpose of the half-day excursion is to examine the marine strata of the Holehouse Gill Formation in the type section, and its relationship with the strata within the Borrowdale Volcanic Group. Walking 3km through rough pasture takes you to 5 localities.
Start Point Ulpha Bobbin Mill SD 190 925

Itinerary 14 Ulpha – Kiln Bank Cross
The aim of this half-day excursion is to examine higher parts of the Borrowdale Volcanic Group preserved within the major volcanotectonic basin centred near Ulpha. Volcanic and sedimentological features of a sequence of andesite and ignimbrite with interbedded epiclastic tuff are illustrated. The itinerary covers 5 localities with 3km of walking and 300m ascent, mostly over rough bracken-covered fellside.
Start Point Ulpha Bridge SD 196 930

Itinerary 15 Coniston to Levers Water
This whole day excursion combines a study of volcanic processes within the upper part of the Borrowdale Volcanic Group with an examination of the remains of what was one of Britain’s most important copper mining areas. 14 localities are visited over 7km of well-marked tracks and 470m ascent.
Start Point Round How SD 2985 9800

Itinerary 18 Subaerial pyroclastics of Side Pike, Langdale
This short excursion provides an opportunity to examine good exposures of subaerially-emplaced pyroclastic rocks, where the deposits of fall, surge and flow may be recognised and distinguished from reworked volcaniclastic sediments. The 8 localities can be toured in 2.5 hours even in poor weather.
Start Point cattle grid NY 2895 0510

Itinerary 19 The Tilberthwaite Tuffs from Langdale to Tilberthwaite
In the heavily quarried area of Tilberthwaite tuffs can be seen an infinite variety of sedimentary structure including horizontal, convolute and cross lamination, flute and load casts, flame structures, graded bedding, complex slumps and accretionary lapilli. This one-day’s itinerary of 15km and 400m ascent can be divided into 3 tours (A: localities 1–8; B: 9–10; C: 11–15).
Start Point Chapel Stile NY 316 056

Itinerary 20 The Lower Borrowdale Volcanic Group of Brown Knotts, Borrowdale
This excursion demonstrates the lower andesitic part of the Borrowdale Volcanic Group, which shows here a mainly subaerial pile of andesite block lava flows, with interbedded reworked volcaniclastic sediments, deposited in alluvial and lacustrine environments, and subordinate pyroclastics. The rocks belong to the Falcon rag Formation and the lower part of the Thirlmere Andesites. 5 localities for a half or full day.
Start Point Cat Gill NY 269 209

Itinerary 22 The upper Borrowdale Volcanics and lower Windermere Group SW of Coniston
A walk across open moorland to 22 localities reveals the outcrop pattern of wrench faults and bedding thrusts of the Caledonian Orogeny. Also viewable is the Caradoc unconformity between the Borrowdale Volcanic Group and the Consiton Limestone Formation, whilst the Ordovician-Silurian boundary is completely exposed with the Ordovician Ashgill Shale followed by the richly graptolitic Skelgill Shales of Llandovery age.
Start Point Boo Tarn SD 282 968

Itinerary 23 Longsleddale, Stockdale and Brow Gill
This excursion of 5km and 10 localities focuses on the Windermere Group (late Ordovician and Silurian) of the eastern Lake District. Included are the classic localities of Stockdale Beck and Brow Gill, the type localities of the Longsleddale and Stile End Members of the late Ordovician Consiton Limestone Formation, and the nature and field relationships of the Stockdale (Yarlside) Rhyolite.
Start Point Stockdale Beck NY 4915 0539

Itinerary 25 The Westphalian and Permian Geology of the Whitehaven Area
This excursion visits Upper Carboniferous (Westphalian) and Permo-Triassic sedimentary rocks in cliffs and quarries around Whitehaven. Rocks of Westphalian B and C age and the unconformity with the overlying Permo-Triassic rocks are featured. Transport is needed between the 5 localities.
Start Point Bransty Cliff NX 9750 1880