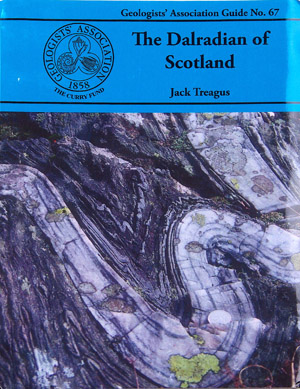 The Dalradian of Scotland probably offers the greatest variety of metamorphic rocks to be found in the British Isles. Here we find sedimentary rocks originally ranging in composition from muds to sandstones and conglomerates as well as a wide range of calcareous rocks and volcanics.

TRAVERSE I THE SOUTHWEST HIGHLANDS

The Dalradian of Scotland probably offers the greatest variety of metamorphic rocks to be found in the British Isles. Here we find sedimentary rocks originally ranging in composition from muds to sandstones and conglomerates as well as a wide range of calcareous rocks and volcanics.

Excursion A: West side of Loch Lomond to Crianlarich
A drive along the A82 road north from Luss, traversing the Southern Highlands Group of the Tay Nappe. The exposures of metamorphosed silts, muds and greywackes are close to the roadside and road cuttings. 6 localities listed.
Start point 11 km north of Helensborough NS 358 907

Excursion B: Along the east shore of Loch Lomond.
Traversing the Highland Boundary Fault Zone. 3 localities by foot and a further 2 by a short drive.
Start point the pier at Balmaha NS 416 909

Excursion C: Crianlarich to Tyndrum
Crossing the inverted strata from the Southern Highlands Group to the Argyl Group. Includes examination of the Tyndrum Fault and mine. 4 localities listed.
Start Point car park on the A82 NN 344 293

Excursion D: Glen Orchy
Crossing the Ben Udlaidh Syncline with exposures of garnet-mica schists and quartzite down to psammites of the Grampian Group. 5 localities listed.
Start Point on the B8074 NN 242 318

Excursion E: Rannoch Moor and Glen Coe
Grampian Group psammites with mineralised quartz veins, and the volcanic cauldron subsidence of Glen Coe. 3 localities listed.
Start Point at a lay-by on the A82 NN 306 456

Excursion G: Onich Shore
A walk along the shore with folded slates and quartzites. 5 localities listed.
Start Point at abandoned quarry on north side of road NN 049 611

Excursion J: The west coast of Argyl; Benderloch, Kerrera and the Pass of Brander
Lower Devonian conglomerates and sandstones unconformably on the Dalradian. 2 localities listed.
Start Point at a lay by on the A828 at Polanach NM 937 502

Excursion K: Kerrera, Connel Bridge to Tyndrum via the Pass of Brander
The sub-Dalradian unconformity between the Easdale Slates and the Devonian conglomerates.
Start Point parking area north of Gallanach NM 835 283

Excursion L: Glen Shee to Rotmell
Crossing the inverted limb of the Tay Nappe and the ‘Flat Belt’ in the Tay Valley. 5 localities listed.
Start Point just after a ford on a minor road NN 988 340

Excursion M: Ben Lawers and Glen Lyon
The inverted greywackes and schists of the Southern Highland Group overlain by the Loch Tay Limestone and the schists of the Argyll Group. 9 localities listed.
Start Point in the National Trust car park NN 610 380