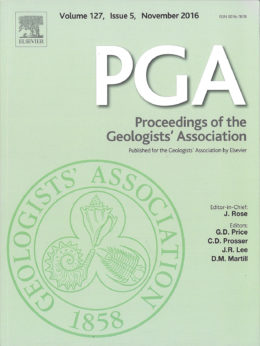 The Proceedings of the Geologists’ Association is an international geoscience journal that was founded in 1859 and publishes research and review papers on all aspects of Earth Science. In particular, papers will focus on the geology of northwestern Europe and the Mediterranean, including both the onshore and offshore record.

Following a long tradition, the PGA will focus on: i) a range of article types (see below) on topics of wide relevance to Earth Sciences ii) papers on aspects of Earth Science that have societal relevance including geoconservation and Earth management, iii) papers on palaeoenvironments and palaeontology of the Mesozoic and Cenozoic, iv) papers on aspects of Quaternary geology and climate change, and v) papers on the history of geology with particular reference to individuals that have shaped the subject. These topics will also steer the content of the themes of the Special Issues that are published in the PGA.

The journal is published by Elsevier and on-line access to the journal can be obtained at:

The PGA has also taken on publication of the definitive Geological Conservation Review site evaluations (formerly published in volumes by the Nature Conservancy Council, Chapman & Hall and the Joint Nature Conservation Committee). So far it has produced special issues on The Marine Devonian of Great Britain, The non-marine Lower Cretaceous Wealden strata of southern England and The Dalradian rocks of Scotland. In doing so, it has placed the scientific evidence-base that underpins many Sites of Special Scientific Interest into both the public domain and the scientific literature worldwide. Further GCR special issues are being prepared, for example on the Quaternary of southern England and the Mineralogy of Scotland, and should result in hundreds of new site evaluations being made widely available.’ 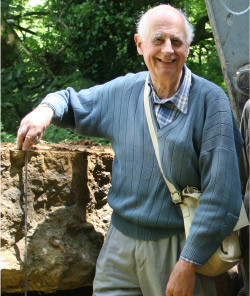 The collection of papers that make up this Special issue are mostly from amongst those presented to an international meeting held in Sherborne, Dorset, UK, at the end of September 2015 and are published as a memorial to Professor John H. Callomon (pictured left), a physical chemist, who gained a worldwide reputation amongst the palaeontological community for his fundamental contributions to sexual dimorphism in Jurassic ammonites and to Jurassic stratigraphy, particularly of the Boreal Realm.

The Special issue is made up of twelve papers, which, after a paper on the conservation of classic Middle Jurassic Sections in the Wessex Basin, south-west England, are principally concerned with Jurassic ammonite faunas. These papers, arranged in a stratigraphically ascending order, include ideas at the forefront of Jurassic palaeontology and the stratigraphical refinement that is possible with detailed work on ammonite faunas. Thus, it is demonstrated that it is possible to correlate to ammonite zonal level over a distance of some 7500 km and it is now clear that ammonite biohorizons frequently allow of correlations of significantly shorter periods than 100 ka. 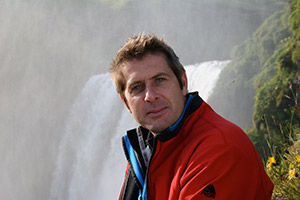 The latest issue of the Proceedings of the Geologists’ Association is a Special issue devoted to Geoconservation. It contains 16 papers, presented at or inspired by the GA’s 2011 Annual Conference in Worcester, describing the importance of geodiversity and geoconservation to science and society and exploring strategies for delivering geoconservation in the future.

Edited by Colin Prosser, Eleanor Brown, Jonathan Larwood and David Bridgland it captures past and present successes and good practice but focuses on challenges ahead. In particular, it explores the opportunities and actions that need to be taken in order to ensure that geoconservation remains an important and integrated part of the way in which we manage and promote the natural and built environment in the changing world in which we live.

A key issue to emerge from the papers, and the conference which generated them, was the need for more effective communication about why our geodiversity is special and why we need to conserve it. TV presenter, geologist and Honorary Life member of the GA, Professor Iain Stewart, who contributed a paper to the volume, believes that successful geoconservation depends on raising awareness of the importance of geodiversity. “Geoconservation [he explains] is about appreciating, promoting and conserving our hidden geological gems, the special places – often on our doorstep – that allow us to piece together how our land came to be. In that light, rocks, fossils and landforms are as much a part of our history as a Celtic burial mound or a Roman fort. It is our common heritage – pure and simple. We need to tell as many people as possible about that heritage.”